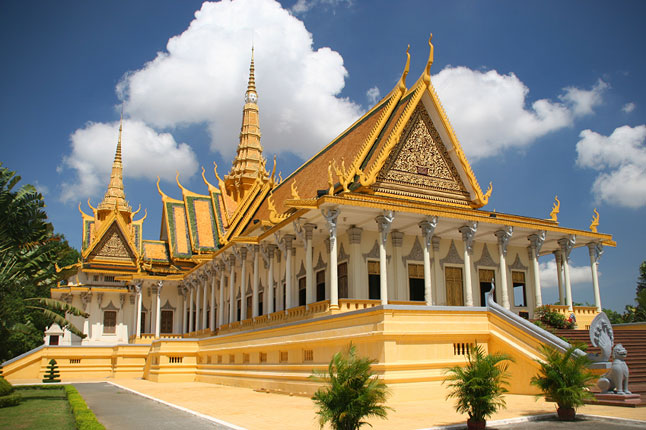 Mixing Charm and Adventure in a Tour of Cambodia:

Upon arrival at the Phnom Penh Airport, you’ll be met and transferred to your hotel.  You’ll then have a city tour which will include the Victory Monument and the National Museum, the Royal Palace (built by the French in 1866 on the site of the old town), and the Silver Pagoda (located within the Royal Palace grounds). You will then end your tour with a visit to Wat Phnom Temple (Phnom Penh's namesake) from which you can enjoy views over the tree lined avenues of the city during sunset. Overnight at your hotel in Phnom Penh.

After breakfast at your hotel, you’ll visitthe Tuol Sleng Genocide Museum.  This former school was used as a prison by Pol Pot’s security forces and became the largest centre for detention and torture during the rule of the Khmer Rouge. After that, you’ll have leisure time at a Russian market and visit the “Killing Fields” of Choeung Ek (lunch not included).  You may then take a walk along the Mekong River and board the boat for the Mekong Sunset Cruise (1 hour) before retiring to your hotel in Phnom Penh.

You will have breakfast at the hotel, followed by an early departure via private car or minivan (along with your guide) to Mondulkiri, a province of 543 km north. You will drive through the jungles of Cambodia, paying close attention, as you will see many kinds of wild animals crossing the road. You will arrive in Senmonorom (a town in Mondulkiri province) and check in to your hotel where you will have time to walk around the hillside of the hotel. Overnight at the hotel in Mondulkiri.

Upon leaving the town, you will set off on a short 17 km drive north towards Sen Monorom. Here, you will have the chance to visit the village of Phulung, our base for elephant treks.  The elephants are not kept in the village, so it is necessary to ask them to make arrangements at least one day in advance. You will have a great time (even though the ride may be difficult at times) as this often funny experience is the best way to explore the landscape close up. In the mid-afternoon, you will meet your car and diver back to Sen Monorom for an overnight stay.

After breakfast, you will set off for a trip to the most famous waterfall in the country, Bousra Waterfall. The jungle trip to reach this place is an amazing adventure. The dirt and less developed roads will remind you of your earlier trip from the civilized capital city of Phnom Penh to this remote province. The scenery is quite interesting, and from the truck you can see the beautiful forest flowers rising from the tree tops and also see local tribal groups walking by the roadside.  You will enjoy a bath at the waterfall and then a picnic lunch. Returning to Senmonorom in the afternoon, you’ll check in to your hotel and have an evening to stroll through the town and surrounding areas before an overnight stay.

After breakfast at the hotel, you and your driver will head through the forests back to the main road at Snuol where you’ll continue to Kratie. Part of the road from Snuol to Kratie is in great condition and the trip will take you about 5 hours. You’ll check in at the hotel in the afternoon, and then visit the Mekong River Dolphins at the Prek Kampi Reserve. These rare dolphins can only be seen here, so you won’t want to miss out on this opportunity! Overnight in Kratie.

After breakfast at a local restaurant, you will leave Kratie by road and go to Chhlong District. Chhlong still has many kinds of colonial houses, buildings and other cultural remnants from the French's Colonial Period. You will then continue to Kampong Cham and check in at the hotel for refreshment.  Next, you will visit Wat Nokhor, with its modern and ancient temples and pagodas (some dating back to the 12th Century).  Overnight in Kampong Cham

After breakfast, you’ll head to Kampong Thom. En route, you will stop to visit Wat Khear Nokor and Phum Prasat. Arriving in Kampong Thom, you’ll stop for lunch (not included).  In the afternoon, you will go visit Prasat Sambor Prei Kuk, located 35 km northeast of Kampong Thom. You’ll explore the ancient capital of Chenla, with its 100 temples dating from the Pre-Angkorian period. You will then continue to Siem Reap for check in and an overnight stay at your hotel.

Following breakfast at the hotel, you will visit the Roluos Group. The monuments of Roluos, which served as the capital of Indravarman I (reigning from AD 877-89), are among the earliest permanent temples built by the Khmers and mark the beginning of Khmer classical art. These include: the temples of Preah Ko (erected by Indravarman I in the late 9th Century and dedicated by the King to his ancestors), Bakong (the largest and most interesting of the Roluos Group temples and with an active Buddhist monastery), and Lolei (built on an islet in the center of a large reservoir by Yasovarman I, the founder of the first city at Angkor).  Next you’ll return to the hotel for your lunch (not included in the package).  In the afternoon, you will continue your temple visits. Included are: Prasat Kravan (with its unique brick sculptures), Srah Srang ("The Royal Baths" once used for ritual bathing), Banteay Kdei (surrounded by four concentric walls), Eastern Mebon (guarded at its corner by stone figures of harnessed elephants, some of which are still in a reasonable state of preservation) and the "Mountain Temple" of Pre Rup. Overnight at your hotel in Siem Reap.

After breakfast at the hotel, you’ll visit the ancient capital of Angkor Thom (12th Century).  The sites include: the South Gate (with its huge statues depicting the churning of the ocean of milk), Bayon Temple (unique for its 54 towers decorated with over 200 smiling faces of Avolokitesvara), the Royal Enclosure, Phimeanakas, the Elephant Terrace and the Terrace of the Leper King.  In the afternoon, you’ll visit the most famous of all the temples on the Angkor plain: Angkor Wat. The temple complex covers 81 hectares and is comparable in size to the Imperial Palace in Beijing. Its distinctive five towers are emblazoned on the Cambodian flag and the 12th Century masterpiece is considered by art historians to be the prime example of classical Khmer art and architecture. Angkor Wat's five towers symbolize Meru's five peaks, while the enclosed wall represent the mountains at the edge of the world and the surrounding moat symbolizes the ocean beyond.  From Phnom Bakheng (one of two hills dominating the plain of Angkor) you will have a spectacular view of the Western Baray and Angkor Wat. Overnight stay at your hotel in Siem Reap.

After breakfast at the hotel, you’ll be transferred to Banteay Srei Temple (10th Century), regarded as the crown jewel of classic Khmer art. Next, you’ll continue to Banteay Samre, built in the third quarter of the 12th Century. It consists of a central temple with four wings, preceded by a hall and accompanied by two libraries, the southernmost of which is remarkably well preserved. Two concentric walls enclose the ensemble. On the way back, you will also see Ta Prohm Temple (lunch not included).  In the afternoon, you will visit the floating village of Chong Khneas, located 10 km south of Siem Reap. Here, you can take a ride in a traditional wooden boat on the Tonle Sap (the "Great Lake" of Cambodia) which is the largest lake in Asia. Overnight at your hotel in Siem Reap.