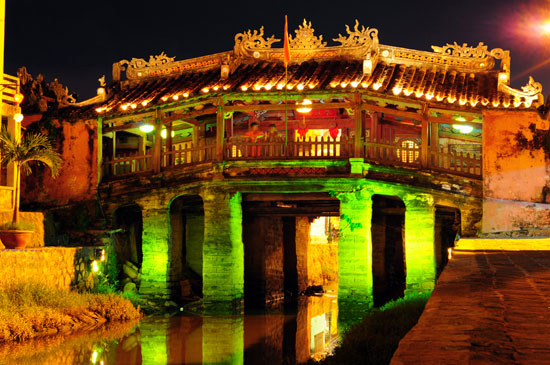 Hanoi Tourism’s car and guide will meet you at your hotel. Then we will transfer to Noibai International Airport for your flight to Da Nang.

Upon arrival in Da Nang, we will have a visit to Cham Museum – the largest collection of Cham sculpture and artwork in the world. After luncheon time, we will move to Marble Mountains – a cluster of five hills made from limestone and marble. These mountains are a well-known pilgrimage site with peaks, caves, tunnels and temples all just waiting to be discovered. Named after the elements metal, wood, water, fire and earth, Marble Mountains exist in a coastal area that is renowned for stone-cutting and sculpture about 9km south of Danang.

After that, we will transfer to the ancient town of Hoi An for hotel check-in. Coming here, we will take a walking tour around the ancient town centre to visit some of former merchants’ houses, the 400 year–old Japanese Bridge, a Chinese communal hall, and the colorful market.

After dinner, you are free to explore the “Hoi An ancient night” before coming back to the hotel for overnight stay.

After breakfast, we will move to My Son Sanctuary, a UNESCO World Heritage Site and a great sample of the ancient Champa civilization located in the southern part of Vietnam. Champa was an independent state from around the 2nd to the 17th century, at which time it was occupied by Vietnam. The impressive Hindu-themed ruins feature many beautiful stone sculptures, temples and towers in tropical jungle surroundings. My Son was also a political centre and a royal burial ground and the complex consists of more than 70 structures devoted to Hindu gods and goddesses and the most noticeable one, Shiva, was considered the protector of the Champa’s kings. Their skilful use of red bricks and sandstone is remarkable.

Following the lunch in Da Nang, we will leave for the old capital of Hue, through the Hai Van Tunnel. We will stop at Hai Van Pass (Ocean Cloud Pass) for taking photos en route.

Dinner, free time for exploration and overnight stay in Hue.

After breakfast at hotel, we will start a day by visiting the Imperial Citadel, one of Vietnam’s seven UNESCO World Heritage Sites. The Imperial City of Hue, which has long been a must-see attraction for tourists visiting a hidden charm of Vietnam, was actually a walled fortress and palace belonged to the ancient capital city of the Nguyen Dynasty for 140 years date back from 1805 until 1945. Then we will visit Tu Duc’s Tomb, one of the most beautiful works of the Nguyen dynasty, with romantic scenery of mounts and lakes. Built decades before its occupant’s death, the tomb was used as a palace retreat before its final use as the emperor’s resting place.

We will have lunch at a local restaurant, then take a leisure boat trip on the romantic Perfume River to visitThien Mu Pagoda (Heavenly Lady Pagoda). This is a well-known pagoda in Hue, which is located on Ha Khe hill in Huong Long commune. It possesses an ancient architecture style which is regarded as one of the most beautiful in Hue. Then we will proceed to visit Minh Mang’s Tomb, the most majestic of all Nguyen Dynasty royal tombs. This tomb is a complex of 40 constructions, including many palaces, temples, pavillons, etc. Many said that it’s a perfect combination of manmade and natural beauty of Hue, where architecture fits harmoniously into the surrounding landscape.

Dinner at a nice local garden restaurant and overnight stay in Hue.

After breakfast, you will be free for your own leisure until tranfer to Phu Bai Airport for your flight back to Hanoi, ending your unforgettable trip with Hanoi Tourism.